It’s no secret. I love Canada.

Canada is like a whole country full of Chicagoans: hearty, super friendly, polite people who always make visitors feel like they want them to move here. And like Chicagoans, Canadians are hiding a very dark secret: winter. Visitors to Toronto during, TIFF, the film Festival, are beguiled by generally balmy weather, significant architecture (though they seem to be racing to erase it), an international culture and outlook, and Tim Hortons coffee. But chat up a native for long and they reveal that for months of the year, Toronto is bitterly cold and inhospitable; my Serbian transplant colleague Sonja said she preferred the winters in Belgrade or even Sarajevo. Winters like that, you could use a drink!

Canada has had thirteen more years than the US to develop its drinks culture, having skipped the years we Americans devoted to the great social experiment of Prohibition. Whole some brands are ubiquitous the world over—like Absolut—some international brands do seem to invest in the Canadian market more than the US’s for one reason or another. For example, Grolsch beer, which is pretty rare in the US after being quite popular in the 70’s and 80’s, is huge here, with as much visibility as Heineken as the official beer of TIFF. It’s so handy too, with the re-closable ceramic “swing top” bottle. At bars and events bartenders put it in chilled flat two-case bins right on the bar, so that guests wanting a beer can just…take one, leaving the bartender to sling cocktails and wine. They wouldn’t dream of self-serve beer at a fancy drinks party in the States.

Another case in point is Scotch. As huge rye whiskey producers, you wouldn’t think Scotch would make huge inroads into the Canadian market. I figure Americans only developed a taste for rye during Prohibition, when it was what was available smuggled into New York and New Jersey, Boardwalk Empire style. My mother’s lifelong drink of choice—Seagram’s V.O.— (She’s since gone down-market to Windsor Canadian) was about as appealing to me as her cigarettes (Carltons). She could safely leave the kids at home knowing with confidence we wouldn’t ever dip into either of these.

But Johnny Walker Scotch Whisky, available in only red and black label varieties in 90% of US bars, does a brisk business in both gold and blue labels in Canada. And at AMC Storys, the gorgeous four story (er, storey)1810 post-and-beam building downtown we’re lucky enough to take over each TIFF, these two varieties were de rigeur and skillfully mixed.

Now I know when you think of a specialty cocktail, if you’re like me, the first ingredient that comes to mind is beets. Johnny Walker had mixed up a huge batch of this stuff to serve at Storys and one glass and I was hooked. Two glasses and I was flopping on the floor of the boat. Three glasses and I was gutted and filleted on the premises. I was getting up to thinking about putting beets in a Bloody Mary. But let’s stick to the matter at hand. Try this at home!

Serves 20. That’s it. If you want to go beet overboard, you can freeze beet juice for beet cubes. If not, freeze the biggest ice cubes you can make. 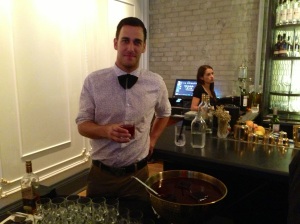 Then on to the “Holiday 2013 Buying Show” née New York Bar Show at the Javits Center (http://holidaybarbuyingshow.com). They held their annual cocktail competition–yes the one I talk about all the time. This year, my friend Arthur Shapiro from Soyombo Mongolian Vodka hosted it http://www.mongolianvodkas.com/soyombo/. Shapiro, as former boss of Seagram North America Marketing, knows what the heck he’s talking about, seeing as he was in charge of Absolut when it was under Seagram’s aegis. So if he says the next big thing is Mongolian vodka, we should put aside our natural skepticism and believe him. He’s also the publisher of the respected spirits blog Booze Business.

Voila! Here are the winners, their drinks and prize money.

Prep: Shake well and top up with Prosecco in a tall glass
Garnish: Arugula

Finally, if you want to know the best of what the judges were drinking at the New York World Wine and Spirits Competition, look no further because here, two months after the fact, we got your Best in Show results right here:

And here’s some of the winners on display:

I’m always as grateful as heck to take part in this event and wheeled some VERY precious leftovers down from the Javits on a broken office cart to my friend Ivy Brown’s gallery (Ivy Brown Gallery http://ivybrowngallery.org ) in the Meat District. The folks at her most recent opening, Zoobs (http://www.wsimagazine.com/uk/diaries/agenda/arts/zoobs-consolidate-the-experience_20130731155749.html#.Un7w85FSAks) were probably surprised to be drinking award-quality wine rather than the usual Yellow Tail or other gallery plonk. You know what she told me when I dropped it off? “Couldn’t you get more white?”

This is a total non sequitur but as I was walking back to my hotel the second night of the show, a group of motorcycles came across 42nd street.  Then another, and another, and another until bikes were stretched the length of the street for the width of the island.  An amazing procession…I realized the clock had ticked over and it was September 11….