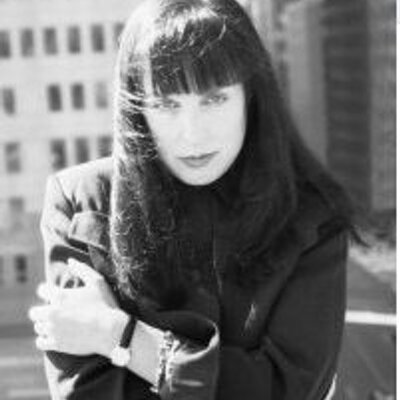 I’d waited a while to write this up. Until I was ready. Since today would have been her birthday, this is it. I know more younger people than I’d like who passed away last year (and this) but Mayra’s passing—at merely 64 from complications of Parkinson’s Disease—was a particular blow and one I’ve yet to really process.

I met Mayra Riesman during my early days at Sundance. I was seated next to her at a dinner party at the Stein Eriksen Lodge, you know: the restaurant where you can order elk, wild boar, rattlesnake, and I think at the time, even bear. We were the guests of a film client of mine willing to foot the bill for twelve or so people at $300 a seat. She was a legit guest. I was just the minder. Those were the days.

We hit it off, not just because I was a publicist and she was a journalist, but because she was witty, cynical, well-traveled and knew a hell of a lot about movies. She also wore bangs before hipsters did but after Patti Smith did. And by and by, she hired me to write for and PR her web site, Film Scouts. The site still exists, and is hosted somewhere, and still resides at http://www.filmscouts.com.

In the days of internet 1.0, Film Scouts was the shit. It had great writing and superior technology for the time. Mayra had a character—an early bot really—called Jerry the Usher, who helped users navigate the site and recommended movies.

I got to go to Cannes a few times with Mayra and her team. Most of the time we just reviewed movies, edited movie reviews from others and wrote long diary entries and essays (one of mine, “Cannes Ham,” is reproduced below), but at other times we did remarkable things, like broadcast a live show by Aerosmith on a proto-broadband service called the Mbone and as rarely, stream movies online. Another time, we brought a bona fide therapist along with us, Dr. Robert Binder. I am pretty sure we were the only media outlet with a therapist on call. He wrote goofy/serious pieces about coping with Cannes mentally, and users could book him for $150 an hour for private sessions. We got to fly a vintage biplane over the Croisette with roll-down windows, leather seats and a Hamilton clock on the instrument panel.

I think Mayra got her diagnosis in 2000. She was in early stages of the disease when I came into New York to host the 20thAnniversary screening of American Werewolf in London. She was going to cover it, and she and I met for breakfast at the Hudson Hotel on the morning of September 11, 2001.

Halfway through—and spoiler alert: this passage parades my profound ignorance of normal human behavioral cues—I noticed the hotel service had become distracted and desultory. Finally, I asked someone why everyone had stopped paying attention to their duties. Their reply: a plane had just crashed into the World Trade Center. Mayra suggested we go up to my room to follow the news on TV. Turns out the real thing was visible from the roof.

My staff were downtown at the Soho Grand. After the towers fell, singed papers from the buildings blew up against their windows before wafting to the sidewalk. Mobile phone service was spotty, but I got through to Universal, the event hosts, who suggested we “wait to see how the day plays out” before canceling the screening. Later, they all left town. Mayra lived on Beekman Place, a few blocks from Ground Zero. Mayra wanted her medication. Mayra had cats. And her husband Michael, a music supervisor and conductor, was overseas. We were on our own.

Mayra proposed we go to the nearest hospital and volunteer. That was Roosevelt Hospital. We show up there and ask for Mayra’s medications, and ask if they needed a hand. “What are your skills?” They asked. “I’m a web mistress,” she said. “I’m a publicist,” I added. “The best thing you can do,” they told us, “is stay out of the way, and maybe even stay out of the building.”

So we made our way downtown. We took the subway as far as 23rdStreet, and had to walk from there. The city was in a daze and in shock, and everyone had stopped working and packed the local bars as we walked down the Bowery. It would not be an exaggeration to say we bar-hopped our way toward the disaster zone. Before too long the streets were blocked too, and Mayra and I talked our way into the car of an EMT (a hopped up, sapphire blue 60’s Chevy Chevelle coupe, I recall), who took us the rest of the way. Bless that guy.

In her building, the power was still on. Mayra checked all the servers and other tech in the apartment. Nearby, another building in the Trade Center complex collapsed and blew a wall of dust up the street, enveloping a local reporter in front of her production van who we watched from the window. We filled the bathtub with water for the cats and got out of there—walking all the way back up to 58thand Broadway with one stop on Houston Street to contemplate the end of the world with nameless acquaintances.

Mayra and I worked on one development project together after that, a reality show concept called I Cannes Direct. The idea was to start ahead of the Festival with a dozen contestants, who’d be whittled down through the script and development process to a few finalists. They would actually start making movies during the festival, with their vanquished fellow contestants serving as the crew. By Cannes’ end, there’d be one finished movie left standing, collaborated on by ALL the contestants.

Mayra was personally and professionally very, very generous to me and others. She had a friend—Karsten something, who has sadly passed away as well—who was in charge of marketing for Mont Blanc. So I was treated to a pen designed for signing treaties and a glorious watch. She was aware of my timepiece fascination too—and gave me not only Mont Blanc swag but a one of a kind family heirloom pocket watch and a travel alarm clock from the 60’s; you know, the leather-clad case kind that folds the clock inside. Sadly, I lost all but the travel alarm to a burglary last summer. Sorry Michael.

On another occasion, she gifted me a spanking new HP laptop, at a time when they cost quite a bit of dough. However, we could never get the computer started. It was somehow fried before I could ever boot it up for the first time. So we returned it and HP sent me another. After that one befell the same fate—some sort of pre-boot failure, HP told her she couldn’t give them to me anymore because they thought I was somehow messing with them to kill them or that I had such bad energy it happened by itself. But she tried. Later, she gifted me one of the first iPads. I still have it, though it’s been relegated to a digital recipe book, basically.

Things. They travel with you a short distance, twining their physical presence and function with memories, which disconnect from your timeline and travel along on their own after the objects leave your possession. I tried to keep that from happening with Mayra, but as time went on I did see less of her owing to both geography and circumstances; the last time was a gallery opening maybe six years ago. But Mayra formed a deeper connection in my life, and while I don’t get to travel on this plane with her any longer, her memory, and our shared memories and my gratitude for them, get stronger as the years go by. Godspeed Mayra, on your birthday today, you are remembered with love and gratitude.