The Federal Underground is one of those unique intimate venues that, when you see a show there, you feel a little a part of a secret tribe. It has an old-school underground industrial feel with Edison lamps at the end of steel girders as chandeliers, and an exposed staircase with metal grilles below the banisters. There’s a SHINING-style blood-red hallway backstage that leads to a speakeasy deep in the basement. The band green room, poorly hidden from the audience, is INSIDE a vault with a 10-foot diameter door that must weight several tons. It’s in this environment that hundred fifty or so indie fans and South Bay and OC punks gathered for Alejandro Escovedo and Jesse Malin’s Long Beach leg of their ongoing tour.

My wife always says about art and artists, “They are not ‘like’ anything; they are themselves!” I continue to disagree. Escovedo is like a Latin Nick Cave and he hates comparisons with Tom Petty. What if I like both (and I do)? His lyrics are piercing and incisive, his styles span genres from roots to country to punk to rockabilly, and like Nick Cave, he’s a tortured soul who wants to share his pain. But as far out on the edge he goes, there’s an accessibility to his performance and music that’s…well, like Tom Petty. So there.

Jesse Malin’s an iconoclastic performer who’s played solo, with punk and rock bands, and just about everybody else. He’s famous for performing tribute shows featuring Lou Reed and most recently, The Rolling Stones’ Goats Head Soup. Here, he stuck to his own compositions with a keyboard accompanist. Tunes included “All the Way from Moscow,” and the punky “Black Haired Girl.”

The audience is as much a part of these shows as these performers. There’s a communion between them that drives the show. Malin in particular, whose confessional patter between tunes drives the likewise confessional nature of his performance. At one point he told a long story about how his mom essentially caught him playing guitar at some VERY early age (he fronted a hardcore band at age 12 that couldn’t get one booking because he couldn’t recruit a drinking audience).

Escovedo’s set interspersed classics from his repertoire but featured numerous cuts from his first new album in four years, Burn Something Beautiful. He was joined for the set by Aaron McClendon on bass; Sean Peters Austin drums and Jason Victor on guitar.

His second tune “Horizontal” had hints of Tom Petty in it (!), singing “I wanna go where you go and that’s all right.” He went on to the urgent and energetic “Sunday Morning Feeling” then offered up two audience favorites; the first, “Castanets,” featuring a 50’s roots rock guitar and punkabilly beat with the clap/sing along refrain, “I like her better when she walks away.”

He introduced “Sally Was a Cop,” saying “This song goes out to Donald Trump.” This was a long, loping arrangement with a martial, almost Irish beat underneath the screaming guitar work. It features his favorite vocal toy, a big metal police dispatcher’s microphone. There’s a terrific audience video of the whole nine-minute song here https://www.youtube.com/watch?v=1LVH1dYAziw. He then brought things downtempo with “Suit of Lights.

Though Escovedo has one song called “I Don’t Want to Play Guitar Anymore,” his performance certainly belied that sentiment, because his axe, emblazoned with a picture of Joe Strummer, was put through its paces on rhythm and lead, on power chords and piercing melodies. At one point in “Johnny Volume,” he leads a chugging messy psychedelic guitar program. He swished his hands across the strings and dissolved it into fuzz–a ten minute jam with numerous crescendos, even windmilling at times.

“Burnt a hole in my jeans/I want to be your man/I want to be everything I promised you.” Across his set, Escovedo’s deeply cynical but hopeful lyrics paint a picture of a self acknowledging, flawed man who yearns for acceptance and redemption. He combines David Lynch’s dark vision invoking the memory of his late brother and the hope of true believers on “Sensitive Boys.”

He performed his first encore, “Chinese Rocks,” with Jesse Malin back on stage and rather than describe it, I’ll simply point you to the second remarkable bootleg video of it here: https://www.youtube.com/watch?v=QiFPTLOH3Hs. He wrapped up the set with Leonard Cohen cover “Boogie Street,” lending his guitar to Malin’s accompanist and brought the audience down a funky boulevard of broken dreams and a thousand kisses.

A Big Convention, Bar None 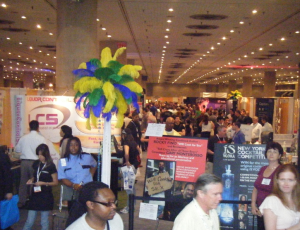 I think I see the fun! Notice the notice for IS Vodka’s cocktail competition. This humble scribe was one of the judges.

A drinks convention seems like an awkward combination of work and play, as serious-minded bar and restaurant owners ply the aisles of vendors that feature copious wine and spirits along with food, drink, digital basketball and a host of other activities that people do…in bars. Come June 26 and 27, there’s the 13th Annual Bar and Restaurant Show at the Javits Center in New York City, billed as a showcase of 300 exhibits of all kinds relating to the industry, and I’m here to exhort you to check it out. http://www.newyorkbarshow.com

I’ve been to this show three times, twice as an exhibitor and once, unwittingly, as a judge, reported briefly way down below. Rather than rehash, I will, to paraphrase Inigo Montoya in THE PRINCESS BRIDE, sum up: it was FUN. Now I am back as a publicist, so I am going to get to see the show from the inside out. I’ve already made as much of a fool of myself as is possible to document in previous visits, so I am coming to the show with a combination of humility and sobriety this time around I might not have had on somebody else’s dime.

Organizer Steven Wesler clued me into some recent changes in the show that could have applied to people just like me. He moved the show to midweek—at the risk of cutting his audience, as he explained—to raise the caliber of the crowd; in a nutshell, taking a day off from work to come to a drinks convention prevents just anyone from turning up, so they are seeing a lot more bar and restaurant owners, executives, buyers and basically, professionals than ever before. A mocktail competition hosted by Ocean Spray and dating site One2One.com has replaced the cocktail contest I helped judge. Of course, the show still involves drinking at midday so there’s hope for some bonhomie among the delegates and possibly, even some unscheduled shenanigans.

Wesler had this to say about the mocktail competition. “One of the hardest things to do when you go out with friends and family is to be a teetotaler. Our mocktail competition is unique and the first of its kind. It allows customers to feel like they are drinking but with no alcoholic side effect. Is it trend? According to The Hero Campaign, designed drivers are looking for more than soda and fruit juice. The mocktail competition will feature many new recipes that quite tasty.” The judges rate the cocktails on taste, appearance, originality, aroma, and overall impression. Participants have only six minutes to make four drinks. I couldn’t drink four drinks in six minutes. The winner walks away with a $1000 prize.

On the other end of the spectrum, the show features a pretty stupendous wine and spirits competition. More than 400 entries are vying for titles, as well as Best in Show. In addition to bragging rights, 28 categories of spirits, and white, red, rose, sparkling, fortified and “miscellaneous” wines will gain increased exposure, greater recognition over their competitors and have an opportunity to use their prize in their marketing.

It’s run by Anthony Dias Blue of Tasting Panel, who I’ve had the pleasure of working with on Koloa Rum, IS Vodka, Spectrum Wine Auctions and a bunch of other events. “It’s a peer review competition,” he says. “We’ve assembled a panel of judges that span all categories of the industry—buyers, producers, restaurateurs, salespeople and pundits—and between the members of this expansive, capable group we can ensure a balanced, reputable result.”

Anthony isn’t drinking alone, as it happens. He’s got eighteen other judges alongside him, including these people from some of the most prestigious establishments in the East:

Plus, there’s twenty seminars. Experts from across the city and across the world will share their knowledge on all things on-premise from fire safety to craft beers. Finally, the Brazilian Trade Bureau is showcasing all things Brazilian. with ten brands in the show and co-ownership of InBev, the world’s largest beer concern, Brazil has taken a prominent place in the spirits and beverage industry, and they’ve come to showcase their ascendancy.