At the southern margins of the Arts District on a fairly nondescript block of Lankershim Bl. with a stereo shop across the road sits Tiki No, North Hollywood’s living ode to Tiki culture.

Formally launched in 2009, Tiki No’s transition from an existing dive bar called Match actually started a year earlier. The addition of the fireplace and patio was done along with extensive work by designer “Bob the Bamboo.” Hand carved totems, bamboo cabanas with thatched roofs set the scene for a Tiki oasis. Owners Jeffrey Best and Kenneth Jones painstakingly scoured for Tiki masks, statues, illuminated blowfish and travel trunks that double as shelving behind the bar. Kenneth himself torched the burnt panel walls on the patio. The bar keeps evolving: the latest additions are two giant Tiki god cutouts, castoffs left at the bar, which Jones is currently bedazzling for outdoor display.

Tiki No balances true old-school—featuring authentically re-created cocktails from the dawn and golden age of the Tiki movement—alongside contemporary creations from the mind of proprietor Simon Jones, a blunt-talking Brit who has had a relationship with owners Best and Jones going back 20 years. Simon has built and been a part of Beauty Bar Hollywood, Star Shoes, Vineyard and Skinny’s Lounge North Hollywood. When offered a chance to be part of Tiki No, he says, “I jumped, to bring Tiki No to forefront of the culture and respecting those two fine men that bought this slice of happiness to North Hollywood.” Among his many qualifications, Jones relates, “I have an extensive Hawaiian shirt collection and antique bar equipment.”

The menu—curated by mixologists Damian Windsor and Jason Bran—is a living history of the exotic tropical drink. While it’s not surprising that legendary Trader Vic’s is responsible for two of the cocktails in Tiki No’s canon—the Mai Tai and the Eastern Sour—and that Don the Beachcomber gave them two—The Navy Grog and the Zombie—other drinks come from as far away from the South Pacific as Egypt (The Suffering Bastard), Malaysia (The Jungle Bird), and, well, Benihana New York City (The Happy Buddha). Tiki No’s modern signature cocktails include the Coconut Mojito (coconut run, coconut water, mint, and lime); the Lychee Luau (gold rum, silver rum, lychee liqueur, Pineapple, lemon and falernum); and the Toasted Marshmallow, (overproofed rum, “fluffed” vodka, Licor 43, falernum, apple, lemon and cinnamon). 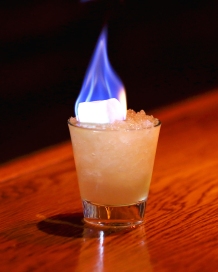 “I have always been a Tiki fan,” Jones explains. “I love the kitsch, passion and attention to detail in the cocktails. I was also Lucky enough to live opposite The Royal Hawaiian in Laguna Beach for several years– where the Chief Lapa Lapa was created.”

While Tiki itself/himself is a wellspring of Polynesian faith and culture (Tiki is the Maori’s Adam and a godlike representation in other cultures), leave it to Los Angeles to distill Tiki into the colorful, kitschy, fun and booze-soaked bar concept it is today. While tropical drinks precede it, many credit Texas transplant Donn Beach (né Ernest Raymond Beaumont-Gantt) and his Don the Beachcomber on McCadden Place in Hollywood as the first Tiki bar in the 1930’s. WWII servicemen returning from the Pacific theatre found the South Seas theme reassuring, familiar and fun, and voila! Tiki bars caught on, and after a dip in popularity in the 70’s and 80’s, have enjoyed a resurgence in recent decades. Jimmy Buffet fans—parrotheads—have adopted tiki as their own, substituting tiki pregames for tailgating at Jimmy Buffet shows. North Hollywood claims both of the Valley’s only Tiki bars, the other of course being the Tonga Hut.

Tiki also loves the holidays. Musically, the swingin’ lounge musical concepts, which bring us everything from Leon Redbone’s holiday album to “Christmas Island” (recorded by everyone from Bing Crosby to the Andrews Sisters and the title of Tiki master Jimmy Buffet’s holiday album) to “Baby it’s Cold Outside” by Dean Martin. There’s also a genre that’s come out of it called “trop rock,” of which Buffet must be the most visible exponent. Tiki No will celebrate with a “locals appreciation night” holiday party December 22 starting at 9PM, featuring open bar 9-10PM for Noho Arts readers (bring a copy of this story with you] and a drawing on site for a comp bar tab all night for two lucky guests. The drawing is available to anyone who likes or posts on Tiki No’s Instagram page #tikinobar between now and December 21!

5PM-2AM daily. Tiki No offers Happy Hour seven nights a week from 5-7pm, and Karaoke every Wednesday and Sunday from 8:30pm to close. 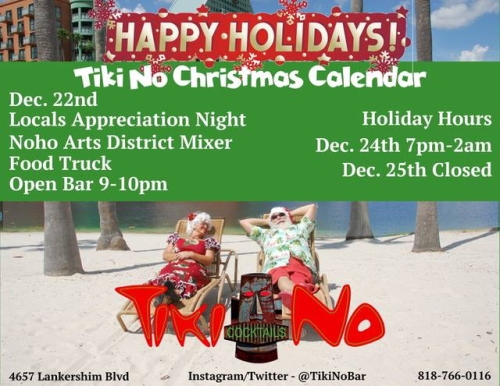